This interview is the third in a special series of five eSeminars covering the Five Principles of World Class IT. The five interviews will be broadcast in sequential weeks, and in this conversation on P3-Project & Portfolio Management, Randy Spratt discusses the following ideas:

Next up in the series will be John Boushy, Former CEO of Ameristar Casinos and CIO of Harrah’s Entertainment, discussing Principle Four, IT-Business Partnerships. The broadcast date will be December 13, 2010. Following John will be

Purchase this book from

Randy Spratt has been Executive Vice President and Chief Information Officer for McKesson Corporation since July 2005. Spratt is responsible for all internal, infrastructure technology initiatives within the Corporation.

He has been with McKesson for over 20 years, most recently as Chief Process Officer (April 2003 to July 2005) for McKesson Provider Technologies (MPT), the company’s medical software and services division based in Alpharetta, Georgia. He also managed MPT’s Business Development, Information Technology, and Strategic Planning offices, as well as MPT’s Technology Services business.

Prior to joining McKesson, Spratt held executive positions of increasing responsibility at the start-up Advanced Laboratory Systems (ALS), culminating with the role of Chief Operations Officer. ALS was acquired by HBOC in 1996, which in turn was acquired by McKesson in 1999, and Spratt took on responsibility for HBOC’s laboratory systems business shortly thereafter. Following the acquisition of HBOC by McKesson in 1999, Spratt relocated to Georgia to become part of the reconstructed management team.

Spratt earned a Bachelor of Science degree in Biology, with a minor in Computer Science, from the University of Utah.

“What’s unique about this book is that it’s not only a must-read for the CIO (and everyone else in an IT department); it’s for anyone associated with the technology industry. If you are a manufacturer, seller, or service provider of technology, you will gain insight into what makes an IT department world class.” – CIO Digest

“Technology is all around us. It is so pervasive in our daily lives that we may not even recognize when we interact with it. Despite this fact, many companies have yet to leverage information technology as a strategic weapon.

What then is an information technology executive to do in order to raise the prominence of his or her department? In World Class IT, recognized expert in IT strategy Peter High reveals the essential principles IT executives must follow and the order in which they should follow them whether they are at the helm of a high-performing department or one in need of great improvement.

Principle 1: Recruit, train, and retain World Class IT people
Principle 2: Build and maintain a robust IT infrastructure
Principle 3: Manage projects and portfolios effectively
Principle 4: Ensure partnerships within the IT department and with the business
Principle 5: Develop a collaborative relationship with external partners

The principles and associated subprinciples and metrics introduced in World Class IT have been used by IT and business executives alike at many Global 1000 companies to monitor and improve IT’s performance. Those principles pertain as much to the leaders of IT as they do to those striving to emulate them.” 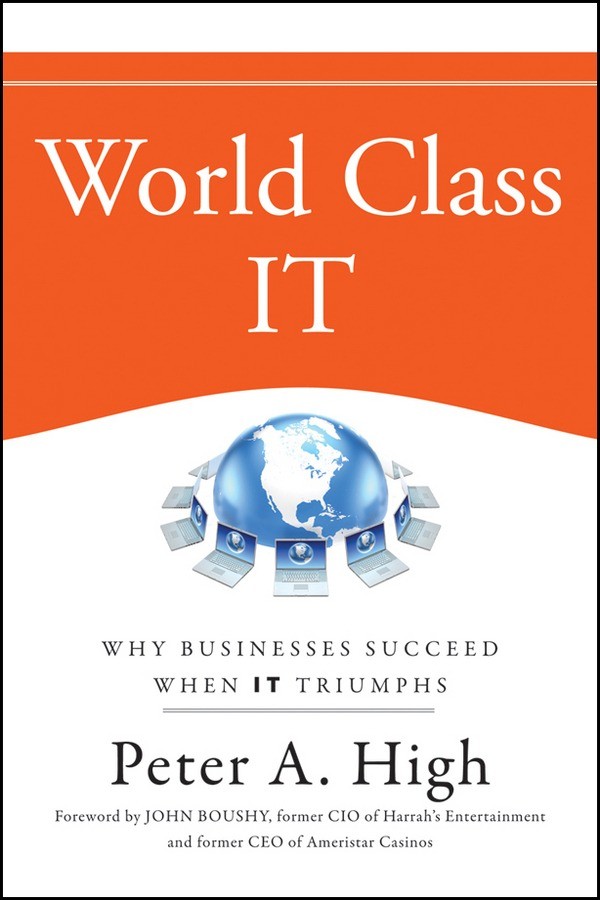 Podcasts Peter High, World Class IT: Why Businesses Succeed When IT Triumphs. December 23, 2009