by Peter High, published on Forbes.com

There are an increasing number of chief information officers who earn upwards of $1 million in salary and bonuses annually. Most of them are unknown, as compensation for CIOs are not necessarily disclosed at public companies, and private companies need not report the compensation packages of employees. The fact that a growing number of IT executives receive such hefty pay packages is a sign for the important work they are doing, their ability to definitively convey the value that they and their teams contribute to the company, and the increasingly important role that information technology has in most businesses. 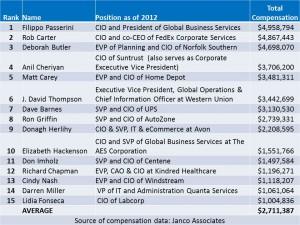 Janco Associates has compiled a list of 15 CIOs who earned more than $1 million in 2012 leveraging SEC data. (The original list includes 20 executives, but five of them are not CIOs.) There are some interesting trends. First, over half of the people on the list (eight of the 15) held additional titles to that of the CIO during 2012. This is a phenomenon I refer to as the CIO-plus. I profiled a variety of CIO-pluses, some of whom earn more than $1 million, but do not appear on the list, as their companies do not disclose this fact.

It is interesting to assess the “plus” roles, as well:

CIOs Focus on Cloud and AI as Security, RPA Rise in Importance

CIOs Focus on Cloud and AI as Security, RPA Rise in Importance

By Peter High
all insights

by Peter A. High
buy on amazon.com

by Peter A. High
buy on amazon.com

We’d love to hear from you.

Thank you for your submission

We will get back to you as soon as possible. Back to site
previous
15 sec
play
15 sec
/
close
next
Update Required To play the media you will need to either update your browser to a recent version or update your Flash plugin.
IT Support by SADOS